It has ended…sort of. The Dragon Ball Super final episode aired this past weekend, and I’m not quite sure how I feel about it. Episode 131 brought the Tournament of Power to an end, and highlighted some exciting new ideas that we may see later on to follow up. But why is everyone saying it is the final episode?

Warning, there may be some spoilers in here, continue at your own discretion

First of all, everything aesthetically about episode 131 was amazing. Mind blowing. Riveting. Simply brilliant. The episode showcased every great aspect we have seen from the entire Super series and jam packed it into about 25 minutes of fist clinching, jaw dropping and eye widening amazement. The colors were brighter and more vibrant and flowed together seamlessly. The animation was crisper, allowing for faster and more direct visualization. The music….oh man oh man the music. The music was so on beat in perfect orchestration. With each passing note that played, I felt my blood pressure rise and my heart beat increase. I leaned closer and closer to my monitor insuring future eye damage as it progressed.

The ending begins with 3 fighters left from Universe 7 facing up against Jiren. Goku is pretty much drained and you figure is out of the fight. After a quick duel between Frieza, Android 17 and Jiren, it seems that the win conditions are met and Universe 7’s victory was assured. But in good ‘ol Dragon Ball fashion, Jiren decides he has just a bit left in the tank at the very end, and powers up one more time. Goku then joins the fight, and the 3 work together, with whatever power they have left and trust pushing them to the limit. It is quickly recognized that Frieza understands what all is at risk and becomes a team player instead of a solo warrior.  I thought this was extremely clever to see as two life long sworn enemies were working together in the forms they originally fought in on Planet Namek.

Eventually, strong punches, energy waves and a whole lot of yelling happen and Goku and Frieza are able to push Jiren out and secure the win. With Android 17 left standing, their universe if safe and does not get erased. 17 gets the chance to make a wish, and brings back to life all the universe that were wiped out from the tournament. You then find out that if the winner had made a selfish wish, that Zeno would of destroyed all the universes regardless, and all of this would of been for nothing. Frieza is also granted another life as Whis makes his halo disappear. Everyone is happy, they go home and celebrate. There is a  bit more filler in there, but you can watch it and find out!

At the very end, we see and learn two things. Goku and Vegeta are fighting. Vegeta taunts Goku to go Ultra, and Goku tells him that he can’t do it on a whim. The power responds to a need, not a desire. Then, in outer space, you see Frieza with his ship and what seems to be like a replenished army.

This is where I was bit dissatisfied. While I’m glad the conclusion was a “fairy tale” ending, all it gave us was a mass amount of questions and speculations. It didn’t really leave us with a heart breaking cliff hanger. Okay yes, Frieza is back. But I’m sure Goku and his friends have more than enough power to defeat him if needed, so it’s not really a threat. I wanted something that would of left me screaming at my screen, a near death or someone missing or maybe someone is about to show off a new power level and it cuts off right before it shows. Instead we get a “Frieza is back and party at Bulmas” scenario. But this is the last episode right?

No, there will be more Dragon Ball Super. The series is essentially taking some time off, but they are not stopping. We have already seen a trailer for the next Dragon Ball Movie. While there is not a lot of confirmed information, most people think that it will be a battle between Goku and the original Super Saiyan God that Shenron talked about during the Battle of Gods film. How they would get to that point is a bit weird, but I guess with Trunks and time travel, anything is possible. Obviously, the final showdown between the Saiyans and Frieza is yet to come, and I’m sure we will once again see another new transformation between the fighters. But will we ever see them work together again? Will we see if Jiren takes a different approach about how he works with his team. Will Vegeta surpass Goku once and for all? Find out on the next thrilling episode of Dragon Ball Super!

Below are some images from episode 131 as well as the trailer for the upcoming movie. Enjoy 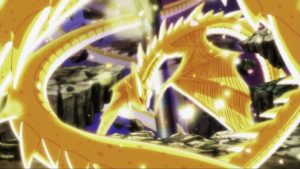 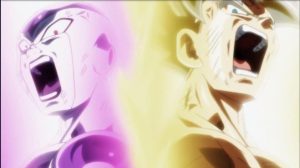 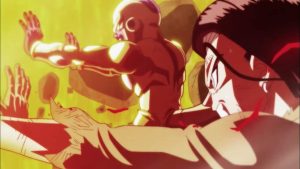 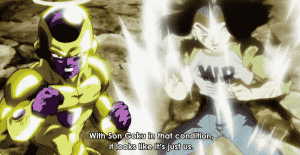 Make sure you follow us on our social media to stay up to date with us!